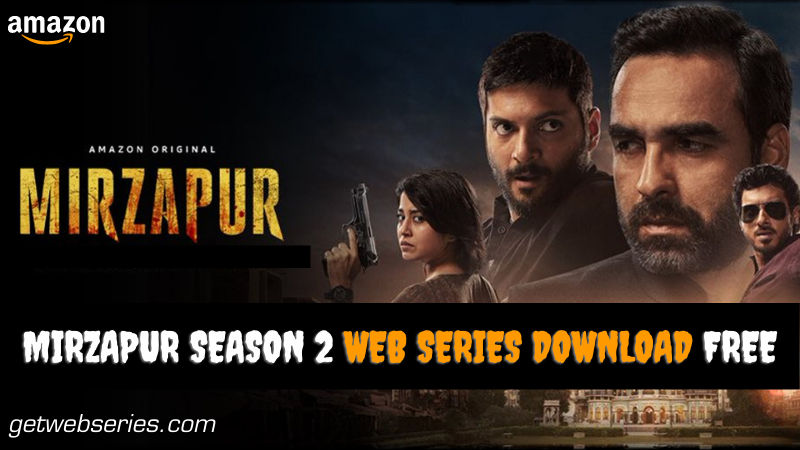 The second season of the most-watched web series has been published on Amazon Prime Video. We are discussing Mirzapur season 2 which was released on 23rd October 2020. After the emotional ending of season 1, all the viewers of the Mirzapur web series are waiting for its second season. The trailer of Mirzapur web series 2 is the most-watched web series trailer on YouTube. On 23rd October everyone got the answer to “Who will Rule on Mirzapur?” So, if you are interested to know about Mirzapur season 2, then continue reading this post because, in this post, we will discuss the storyline, cast, review, and How can you Mirzapur Season 2 ?  So, let’s begin.

Mirzapur season 2 is also full of crime, thrilling scenes. This Amazon prime web series is an Indian crime thriller series which revolves around Guddu, Munna, and Bablu. Both have their gangs, and both want to rule in the Mirzapur district. Mirzapur is one of the famous web series in India.

This season 2 was shot in Mirzapur, Lucknow, and Varanasi. Mirzapur web series season 2 also revolves around drugs, mafia, murders, and full of bold scenes. In this season, you will see the brutal fight between Guddu’s gang and Munna’s gang. In this season a new character, Monty will arrive and he is the son of Munna.

The Storyline of Mirzapur Season 2

Mirzapur season 2 the story begins with Guddu, and golu both were safe from the attack, but Guddu becomes paralize. In the end of the first season, you saw that Munna had killed Bablu and Sweety. Guddu, and Golu both are in fire to take revenge from Munna, and Kallen. Babar and Dimpy are also living with Guddu. CM daughter Madhuri, and Guddu both are working in the elections. Both are coming closer.

On the other hand, Sharad and his family are in fire to kills Kallen and Munna. Guddu and Golu came to Saurav Tyagi’s house to set their drugs business, but Saurav denies to do drug business. Golu uses her body, and she attracts Vishal, who is the grandson of Saurav Tyagi, and Vishal accepts for the drug business. A few weeks later, Saurav hears that Vishal is in the drug business; he kills him. Kallen came to CM house and put a proposal to do marriage of Munna, and Madhuri.

But Munna is not happy with this marriage. CM has won the election, but JP Yadav wants to become the CM that’s why he wents Sarad to kill CM, and Sarad killed CM. Then JP Yadav became the CM of UP. After he lost the seat because of Zarina, Kallen thinks that Madhuri will make him the new CM. But Madhuri became the new CM. Then Munna hears that Babar and Guddu are living in Kanpur.

That’s why Munna killed Babar and his grandmother. Maqbool, who is the father of Babar, decides to kill Kallen’s father. But when he goes to kill him, Beena comes there, and she says that he will kill him, and Beena killed him. When Munna comes to house Raja who is the servant wants to shoot, but Munna kills him.

The Storyline of Mirzapur Season 1

The first season of Mirzapur starts with Kallen Bhaiya who wants to rule on Mirzapur by his terror, and gun trade. Vishal Ramakant, who is a police inspector, had decided to arrest Munna. Munna kidnaps Vishal’s son, and he almost kills him, but at the right time, Bablu comes, and he saves Ramakant’s son. When Kallen hears about this, he tries to convince Bablu to come in his gang. Kallen was impressed by Bablu.

Munna wants to teach a lesson to Bablu and Guddu. Munna heard that Bablu is in love with Sweety, and Sweety’s sister- Golu is against Munna in the college election. Kaleen Bhaiya’s wife, Beena, is secretly fulfilling her sexual desires with the servant and one day her father-in-law catches them red-handed. Kallen’s father forces Beena to do sex with him. When Kallen knows about this, he kills his father and that servant.

Ravi wants to kill Kallen, and Munna, that’s why Ravi asks Guddu, and Bablu to come on his gang. Munna has planned a very dirty game for Guddu and Bablu. Kaleen Bhaiya asks Munna to kill Guddu and Bablu because they are also planning to rule in Mirzapur district. In the end we saw that Munna, and Kallen had killed Sweety. But with the help of Golu, Guddu was able to survive in that attack. Sharad decides to take revenge from Guddu, and Bablu for Ramakant’s death because he thinks that they both had killed his father.

How Can I Mirzapur Season 2 Download Full Web Series?

1. What is your review towards Mirzapur season 2?

Mirzapur 2 has become the top rated on Amazon Prime Video. The cast of this series is perfectly suitable with the characters. It is a must-watch web series. The season of Mirzapur web series had been released on 23 October 2020.. But it is available only for the Prime members.

3. What happens in the ending of Mirzapur 2?

No, the story of the Mirzapur season 2 is not a real story. Yes, some scenes are taken from Gang Of Wasseypur, but it is not based on a real story.

Is there any possibility of Mirzapur season 3?

In the end, we saw that Sarad saves Kallen’s life because of his own profit. And Karan who is the maker of Mirzapur had announced that season 3 of Mirzapur web series would release in 2021 and 2022. Kallen Bhaiya will be back in season 3.

5. Why is Mirzapur season 2 a very famous web series?

So, in the above post, we have discussed Mirzapur season 2 storyline, downloads, and the storyline of its first season. The second has already been published on 23 October 2020. We recommended you to follow our steps to watch this series offline. You can watch this series online also on Amazon Prime Video. Before watching season 2 watch its season 1 because you will never understand the story if you watch its second season directly. All episodes are available in HD Quality.